We have just finished the Canada National Competition, where we pick the three students with the highest scores who will represent Canada at the World finals. Our National champions for PowerPoint and Excel are from British Columbia and Ontario. Our National champion for Word is Mckayla Saint-Cyr, a student from SAIT Polytechnic in Calgary, Alberta.

This marks the fifth year in a row that SAIT Polytechnic has sent a student to the Microsoft Office Specialist World Championship. In 2010, one of their students even won the Gold!

Schools like SAIT Polytechnic are attacking the problem of the digital divide, it is an engaging program for students, it boosts resumes, it creates leaders. It provides teachers with the ability to give real life skills and experience to kids. Mckayla is now a productive student, ready to compete on a global level. She wins an all-expenses paid trip to Disneyland where Microsoft hold the finals this year in late July.

Mckayla, a student at SAIT Polytechnic in Calgary ranked number one in all of Canada in the Word 2010 category. Mckayla has won an all-expenses paid trip to Disneyland in Anaheim, California to compete against world class competitors in the Microsoft Office Specialist World Championships for the top spot in Microsoft Office Word 2010. Her instructor, Ruby Brar will be coming to cheer her on. “This will be such a fantastic experience for Mckayla to showcase the skills she has gained while competing and meeting with students from all over the world,” says Brar.

CCI Learning, the Microsoft Academy Service Partner and exclusive Certiport Platinum Solutions Provider for Canada, is proud to sponsor students like Mckayla who continue to exceed all expectations. Malcolm Knox, President and CEO of CCI Learning, comments, “SAIT has a long track record of producing Canada’s top Microsoft Office Specialists. Every year we are thrilled to witness the high performance of AIM students at SAIT. Mckayla has demonstrated that she has the highest levels of productivity when working with documents in Microsoft Word. We are pleased to announce her as the Canada National Champion of Microsoft Word. 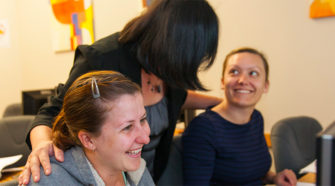