The Life of a Practicum Student at CCI Learning

The atmosphere was electric in the new Microsoft Canada Excellence Centre as Noah, Connor and Cassandra were called up to be crowned the Microsoft Office Specialist National Champions in Excel, Word and PowerPoint.

The three students from Surrey Christian School and Westview Secondary School—Noah Stelting, Connor Grant, and Cassandra O’Callaghan—outperformed competition from schools, colleges, and universities all over Canada to win the Microsoft Office Specialist National Championship. All three students earned 100% on their exams in the following categories:

“Why can’t it be you?” President and CEO Malcolm Knox asked in reference to the Canadian Championship at a school-wide event earlier this year. All three students showed their competitive edge as they each strove to reach their goal of becoming a Microsoft Office Specialist National Champion.

Our National Champions rank in the top 0.0003% in the world for their Microsoft Office skills!

As a result of this success, the expert trio has won an all-expenses paid trip to the Microsoft Office Specialist World Championship from Microsoft Partner, CCI Learning. We could not be more excited to support them in their journey to Orlando, Florida from August 7th-10th 2016 to compete against bright students from all over the globe.

Last year’s championship attracted more than 600,000 unique candidates from 80 countries. This year, Microsoft is expecting even more candidates from all over the world. Candidates will compete for a chance to win a $7,500 scholarship and the title of “World Champion” in their respective categories.

The students will compete against the best of the best, and will have the opportunity to network with not only their global competitors, but also sponsors and Microsoft partners from all over the world.

When asked what he is most excited about, National Word Champion, Connor, responded with,

A big congratulations to Noah, Connor, and Cassandra on their outstanding accomplishment. Cheer on our Canadian champions as they prepare for, and compete in, the 2016 Microsoft Office Specialist World Championship in Orlando, Florida!

Subscribe to our Facebook page to view all the great photos taken at the ceremony and to keep watch for more videos and stories featuring our Canadian Champions.

Next Ushering a New Wave of Brilliant Youth 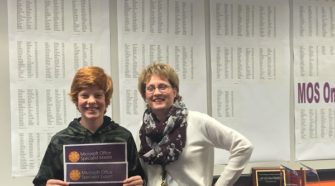